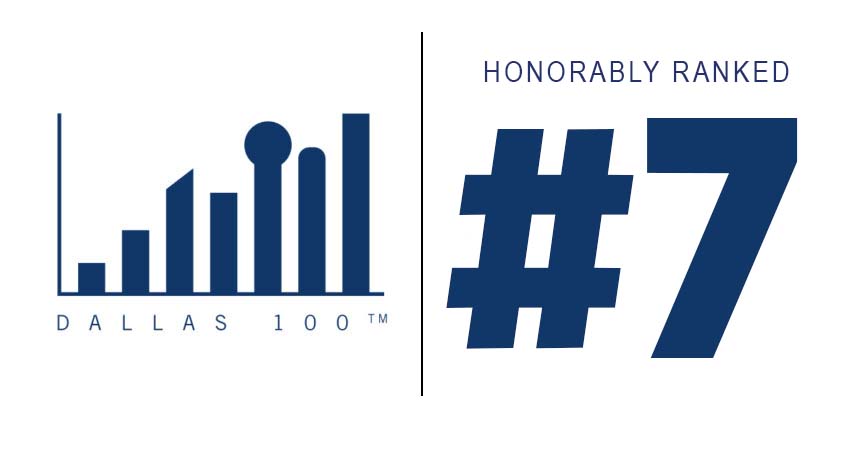 The Dallas 100: SMU Cox Unveils Its 2021 Ranking of the Fastest-Growing Private Companies in Dallas-Fort Worth

Dallas (SMU)  Nov. 22, 2021 – The SMU Cox Caruth Institute for Entrepreneurship has released the names of the entrepreneurial businesses that made it into this year’s coveted list of Dallas 100 companies. The Dallas 100 competition annually gauges the ascension of privately held companies in Dallas and surrounding cities. The release of the top 100 company names is a precursor to an awards celebration that will culminate in the unveiling of this year’s No. 1 fastest growing, privately held company. Traditionally, the Dallas 100 company names are announced alphabetically at an autumn reception, followed a month later by an awards ceremony that is highlighted by a countdown, with Dallas 100 names divulged in order from No. 100 to No. 1.

For the past 31 years, the Dallas 100 ranking by Southern Methodist University’s Caruth Institute for Entrepreneurship celebrates the fastest-growing companies in Dallas-Fort Worth.

Earlier this year, SMU Cox Dallas 100 hosted a first-of-its-kind draft event that charged the city with a challenge seeking the best companies the region has to offer. The Dallas 100 awards show is “the championship round,” of that effort recognizing 100 of the “greatest champions for agents for change, problem solvers, builders, and job creators” in Dallas-Fort Worth.

Collectively, all 100 companies generated more than $8.5 billion in revenue over the past three years, and created over 10,000 jobs in the same time period.DFW “growth engines” contributed $8.5 billion and 10,000 jobs

“Let me repeat, we have created—not furloughed, not laid off. We have created over 10,000 jobs,” Mak said at the event. ‘You are all COVID busting companies.”

he companies create thousands of jobs and pump “hundreds of millions of dollars into our economy year after year,” Mak said last year. It’s why SMU Cox started the event: to call attention to the critical impact the entrepreneurial spirit makes on the Dallas economy.

The winners represent a broad spectrum of area businesses. Companies are ranked by the Caruth Institute for Entrepreneurship on percentage growth and absolute dollar growth over the previous three years, with an emphasis on economic contributions to the Dallas-area economy.

This year, the area’s top entrepreneurial companies were revealed in rank order from 100 to one at a ceremony held at the Omni Dallas Hotel on Thursday, November. 18. The event, which can be viewed online, was facilitated by business-to-business media provider MarketScale.